We are quite often asked how do we spot the difference between a glis glis and a red squirrel.

The glis glis has a squirrel like body, small ears, large feet and a bushy tail like a squirrel

the main difference between red squirrels and glis glis though is the size with the average glis glis measuring 14 – 19cm whilst the squirrel is a larger 23 – 30cm.

That being said, when you put a very large glis glis next to a very small squirrel there isn’t a lot of difference.

Also, when you have glis glis and a squirrel scuttling about in your loft, scratching away and chewing on you pipe insulation or electric cables at 3:00 in the morning one tends not to care whether it’s a squirrel or a glis glis, you just want to get rid of it.

The problem is, if you trap a red squirrel in your loft you can just let it go in your neighbours garden whilst they aren’t looking, where as if you trap glis glis in your loft it is against the law to release it back in to the wild. 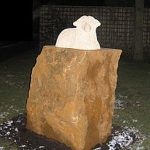